A lytic bacteriophage having recognized “its” bacterium fixes to its surface, lyzes the cell wall, and injects the genetic material inside. As a result, the synthesis of the own components in the bacterium stops, the bacterium DNA is destroyed, and it begins to produce the phage components. Using the ready DNA molecules and proteins by the way of self-assembly from 200 up to 1,000 of mature phage particles are formed inside the bacterium. Due to the action of the phage enzyme lysozyme, and the growing intracellular pressure, the cell wall is destroyed and the new virions get into the surrounding medium. The whole cycle – from fixing of the phage and up to the release of its offspring from the bacterium – may take from several minutes to several hours.  The process is repeated until all the bacteria sensitive to this phage are lyzed. 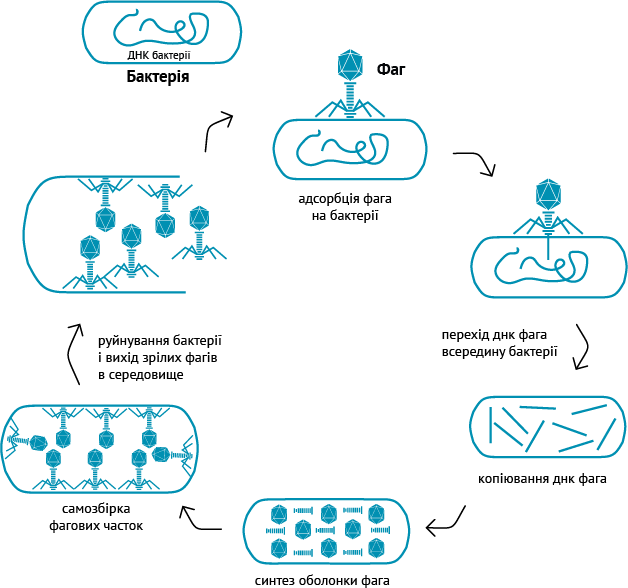 The history of phage application in the medicine

The bacteriophages were discovered by the French microbiologist Felix d’Herelle in 1917. The unknown agents destroying the bacteria were described by the scientists ever earlier, but it was d’Herelle who pointed their viral nature and called them “bacteriophages”. Later he distinguished the phages of a series of pathogenic bacteria, and suggested using them intentionally for prevention and treatment of infectious diseases.

In 1930-s a lot of laboratories and pharmaceutical companies began development and production of phago-products. However, the discovery on antibiotics in 1940-s swept the phagotherapy under the carpet. The antibiotics quickly killed all microbes randomly, and the belief in their “wonder power” had no limits. Besides, they were easier to manufacture, than the phago-products, and they promised early income. It is no surprise that the phages were temporarily forgotten.

Only a few scientific centres continued their work with bacterial viruses. The situation remained unchanged until 2000-s, when the doctors at first, and then the regulatory authorities began to ring the alarm: the antibiotics lose their efficiency, the bacteria resistant to many, or even to all of the known antibiotics are met more and more frequently. The scientists activated their seach for alternative methods of fighting the pathogenic microbes, and of course recalled the bacteriophages.

What infections are treated with bacteriophages?

The bacteriophage products are applied in adults and children for prevention and treatment of:

The bacteriophages can be used independently as well as in combination with the other antibacterial agents. The phagotherapy, in particular, is reasonable in case of resistance of the causative bacterium to antibiotics, as well as in case of the patient’s intolerance to antibiotics. Traditionally bacteriophages are produced in the form of liquid agent applied orally, in applications, irrigations, enemas, installations in the nose and sinuses, wound chambers, in drained cavities – abdomen, pleural, bladder, etc.

Self-medication may be harmful to your health